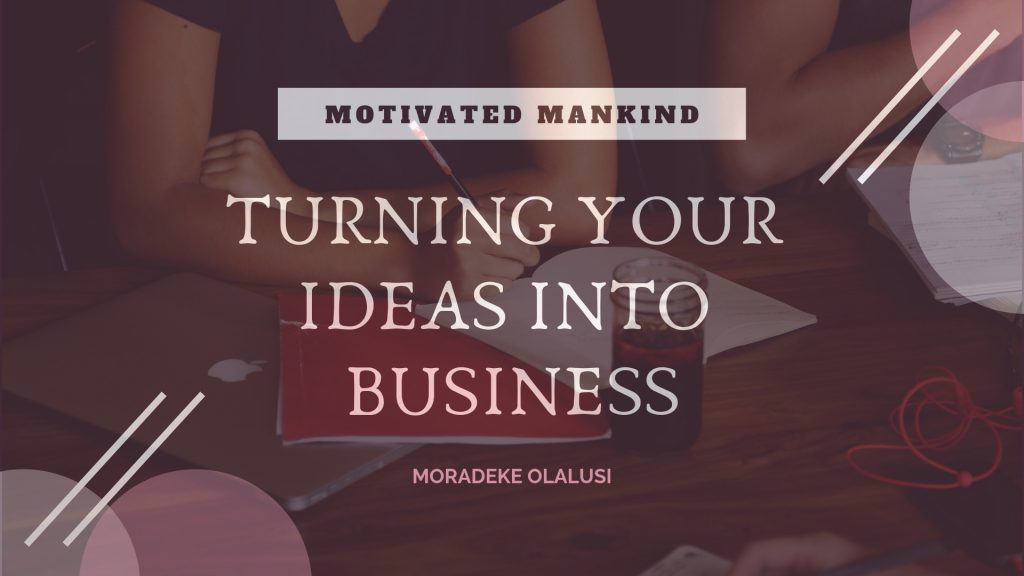 Part of the Entrepreneurial Mindset series:

What is an idea?

An idea is also a mental picture of something.

An idea is a chain of thoughts with a specific purpose.
An idea is a mental picture of thoughts and concept that is designed to motivate an individual into discovery something that could make him or her achieve a greater purpose in life.

What is an idea?

An idea is also a mental picture of something

An idea is a chain of thoughts with a specific purpose.
From all that has been discussed on this platform so far I know that we know what a business and career is, although there are different but still have similarities.

What makes business different from career?

Your ability to answer this is an indication that you really know what a business is and also what a career is.

Well I feel a business is set up with the intention of making profits, while a career is built over time and involves a lot of self developments training.

An idea is a mental picture of thoughts and concept that is designed to motivate an individual into discovery something that could make him or her achieve a greater purpose in life.

What we are made for?

What our purpose is purely for?

Sometimes we use our business profit to sponsor our career.

So how do we go about it?

I have a big believe that the only reason that we can have access to idea is because deep within us we can achieve it.

Let me try and break it down.

If deep within me I am looking for admission and an idea on how to run a bottle water company is running within me, it means that I have all it takes to run a company.
Now when we have an idea or an idea drops into our brain, we need not to rush
We need to be careful and we also need to take some strategic steps such as

The last time that I took a class here I am sure that we told us the difference between both.

2) how soon or far, do you want it materialize?

Don't forget that an idea not utilized will be transferred to another.

You shouldn't take forever and work out your idea.

Someone said that for the idea to drop in your heart is because God wants you to do something about it.

3) Translate your idea into a business

I am sure that we all know that ideas will forever remain null and void of appropriate steps are not taken as soon as possible.

Ask your self if your idea has fulfill the Acronym SMART that is,

S - Specific ( ideas are not jack off a trades)
M - Measurable ( we don't have ideas in abstract)
A - Achieve able ( this means that has possible is it for you to be able to bring a success out of this idea) I have listened to so many ideas that sometimes I get confused.
R - Realistic. All ideas must be visible. You can't ask an idealistic *where is the car you told me you have an idea about? and he will tell you that it is still in my mind oooo* that person is not yet ready for business.
T - Time. All ideas must be time bound. It is an idea not a rolling budget

There is always someone who has done what you are about to do. Find out from them how they went about it.

Only those that have father's go further in life

6) Don't be too eager to start

Take your time but don't waste time in the process.  Be calm about it

6) Pray serious about whatever you want to do.

Prayers make all impossibilities possible
I think that is where I would like to stop today
Do we have anyone who wants to ask one or two questions, the person can ask me now

Question:
Between an idea and the actualization of that idea is a Process and Work

1. Can you expatiate on Process and work?

I learnt that An Idea or dream will remain a dream if the dreamer refuse to wake up and work.

2. Many young people believe that idea is so beautiful but it is not feasible

How can one make his/her idea feasible?
1. Can idea be sold?... If yes is it ideal to sell ideas....or should one even be selling ideas?
2. Assuming someone has an idea of over 20 million Naira and above net worth and due to his or her financial limitations doesn't seems to be close and therefore cannot act....so what do you advise?

Answer:
Let's start with the first one

Process is the systematic arrangement of how an activity should be done.

Example of a Process is a person who has the dream of having a car wash.
The process of that dream are the following.

2) the needs to ensure accessibility of water

3) Get certain equipment such as buckets, hose,brush etc

4) Do hos recruitment and selection

While work is the physical or/and mental activity that an individual gets into in order to satisfy self and meets his demand and wants. Process is activity one engage in to activate the work.

How can a beautiful idea be feasible?

In fact what makes the idea beautiful is because of the feasibility characteristics embedded in it. There is no idea that cannot be feasible.

Ideas can be sold.

In Lagos State in less than a year a body was initiated called neighborhood some of us have seen their patrol van.

A young man who is a fresh graduate got the idea and took it to Governor Ambode for sponsor and Ambode told him that he can't .

He read through his idea and told him to leave.

As he was leaving someone told him to go back and tell Ambode that he would give him the plan for free but he must hold a strategic position there and the governor agreed.

He decided to be the He of that new development and today he his doing fine
There are so many ideas that needs to be sold out. Acrimony is a film we need to watch.

A man has an idea that took him years to sell, but he eventually sold it and he became made. Selling your idea is work on it's own. If we can sell our ideas in this part of the world, we will end up living in a better Nigeria.

Nevertheless we must be careful on the ideas we are to sell or not. I also heard that most of this musicians don't write their songs themselves. I was told that the people who write the lyrics of their songs can't sing. But they have the strength of putting words together to make sense, and they sell as high as $1,000,000.

There is a silent law of nature, the more you give the more you get. Before you even have an idea 20 million, you need to do the following

2) Build strong relationship with like minds( it is unwise for a goat to move with a lion) move with people who believe in your dream.

3) Start little. There is an adage that says that we don't that the depth of a river with two feet no matter how big your dream is there must be a starting point. Identify the starting point and start from there.

4) Involve people. GTBank is owned by a lawyer and an accountant. Without mixing words together we know how updated they are with the activities technology.

5) Because of the volume of money involved you can't afford to make mistakes get a mentor on that line and learn.

There must always be a learning period.

Next Business Etiquette for Entrepreneurs

No comments yet! You be the first to comment.